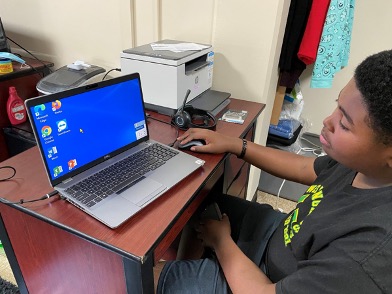 In October 2020, Teon underwent brain surgery to have a tumor removed. He was only 17 years old at the time, and while removal of the tumor saved his life, it also resulted in sudden vision loss. Teon said that he remembered being terrified when he woke up from his surgery and part of his visual field was gone. He was most worried about how he was going to get around, and during his recovery had to learn to utilize his remaining vision as well as adapt to new ways of doing things. “I had my mind on college, and I was determined that I wasn’t going to let this stop me” said Teon. He continued with his plans to enroll at Illinois State University. One year after his brain surgery, an IATP Assistive Technology Specialist visited him at his dorm room on the ISU campus and helped with the installation and set-up of a laptop computer system installed with computer screen magnification and screen reader software. Teon is seeking a degree in business, and during the evaluation talked about his plans for the future which include not only owning his own business, but also one day opening a homeless shelter to help give back to the Chicago community where he was raised.